Using Overheads to better the Serve!

We had a new student (with wonderful potential, I may add!) join our academy recently.

There were a lot of things that went wrong with the serve.

Yes, he had a poor toss.

He also kept his hitting arm very stiff & straight while hitting the serve â€“ his arm didnâ€™t have that natural bend from the elbow.

But what was really bad was that he kept mis-hitting his serve every now and then.

He would try to really hit the ball very hard with the serve â€“ but the ball would not hit the sweetspot of his racket and would go into the opposite side without too much power.

So we had a problem at hand and I had to help sort it out.

This is what I did in our individual session with this player to better his serve:

I made him practice the overhead. 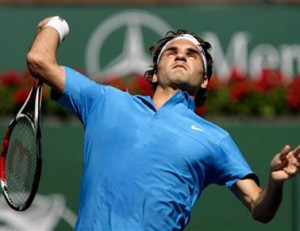 Source of the pic: http://www.yocto-tennis-club.com/best-tennis-tips.html

And the sole instruction that I passed on was: â€œWatch the ball.â€

â€œI want to see each ball hitting the centre of the racket on the overhead.â€

I did not want him to do anything fancy â€“ nor did I want him to go for great power on the overhead.

I just wanted him to watch the ball and middle every ball.

And I proceeded to feed him simple overheads. Not tough ones â€“ none deep or very high â€“ just some easy ones.

I wanted the student to make good contact with the ball.

As you would expect, he did struggle with it.

After practicing the overhead for about half an hour, I got him to practice the serve.

Now his serve automatically had much better rhythm and his racket made good solid contact with the ball.

There are two reasons why practising overheads in this situation worked:

1. If you can get the students to middle a ball on the overhead, it gives them a lot of confidence. Because to hit a good overhead, you have to â€˜watchâ€™ the ball carefully and judge the ball. Hitting an overhead is tougher than the serve, because the incoming ball is higher and has to be judged accurately.

2. When a player starts middling the ball on the overhead, he/she automatically starts swinging freely. Because of the confidence, he does not hold back- he goes for it. This results in a free flowing full swing with good racket acceleration.

And that is precisely what one requires to hit a good serve!

Hence for the above mentioned two reasons, using overheads to improve the serve is a good idea! J

This entry was posted in Uncategorized. Bookmark the permalink.