I believe the most important thing in tennis, after watching the ball, is to play with the right grip.

I think the biggest disservice a coach can do to the player is to teach a kid learning tennis a wrong grip.

I believe most of the coaches do tell the kids the right grip, but if the kid plays unsupervised, they somehow wind up playing with a wrong grip.

The problem with learning the wrong grip is that correcting it later becomes a herculean task. Unlearning the old grip and relearning a new grip is one of the toughest things to do in tennis.

This is more so, because your grip has an effect on almost all aspects of your game. If you learn a new grip, your contact point changes, so does your footwork. Hence relearning it later is no fun.

And I would even go as far as suggesting that the stroke on which a grip change is performed will almost always remain a chink in the armour for the tennis player.

Some people will argue that there is nothing right or wrong these days. Whatever gets the job done is the right way to play.

I donâ€™t believe in the above mentioned point. Here’s why…

I think the above rule is more about exceptions than for most of the players.

During my MBA study, we used the words Effectiveness and Efficiency with aplomb.

They are the right words to be used for teaching tennis grips. Hereâ€™s their real meaning:

Effectiveness: It means the grip or the shot does what it is supposed to.

Efficiency: It is the ratio of output to input.

Now, using the two words for checking whether the grip is correct or not?

Test of Effectiveness: Can the player hit the intended target more often than not with the grip? Can s/he hit the ball where s/he wants to and with pace?

Test of Efficiency: Can the player hit the target in a relatively easy manner (without straining too much, using too much energy, etc.)? Is the stroke â€˜effortlessâ€™?

The above two questions are the true test for any grip. If you can do both the above, you have the right grip.

This will also automatically take care that there is little or no chance of an injury, a repetitive stress injury.

I recently had a tennis parent come to me with a problem. He felt that his boyâ€™s game is not as effortless as the peers. And when I saw the kid play, the first thing I noticed was that the kid played forehand with a western grip!

This also brings me to an interesting observation regarding the use of topspin. Do you think topspin is efficient? Why did it come about in the first place?Â  I shall answer this question in the coming blog(s).

As I believe is widely prevalent today, the best way to learn a good grip is to become familiar with the Base Knuckle of the Index finger, the Heel Pad Â and the bevels on the racket.

This is given lucidly and quite beautifully at http://www.busy-tennis-players.com/tennis-grips.html & at http://www.tennis.com/articles/templates/instruction.aspx?articleid=1337

Every grip has its own advantages and limitations.

I would like to give a brief account of the advantages and limitations of each of the grips:

For the Serve, volleys & slices, players and coaches worldwide prefer the Continental grip.

For the forehand, there are three main grips:

For the Two Handed backhand, there are two main grips: The Eastern/Eastern Combination, And the Eastern (Non-Natural Hand)- Continental Grip(Natural Hand)*

*By Natural hand, I mean using the hand one is most dexterous with.

The one-handed backhand is mostly played with a. the eastern backhand grip and very rarely with b. Semi-Western Backhand grip

The Continental Grip, also known as the hammer grip, has become the standard for the serve, overheads and slices. 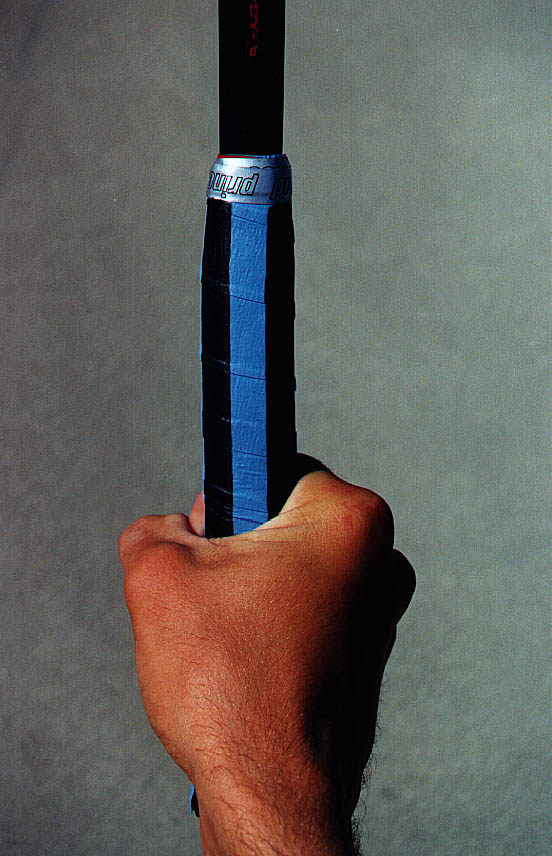 (Source of the Picture: http://www.tennisserver.com/turbo/turbo_04_07.html)

It is also good for the volleys.

Volleys can also be hit quite well with the eastern grips. So take your pick for the volleys.

A majority of coaches prefer the continental grip for the volleys because of the notion that one would not get time to switch grips at the volley (from forehand to backhand).

I donâ€™t agree with that.

With suitable practice, one can very well switch grips in the volley.

Donâ€™t go for the continental grip just because of lack of time. Go for it, if you believe it is more effective than the eastern grips. 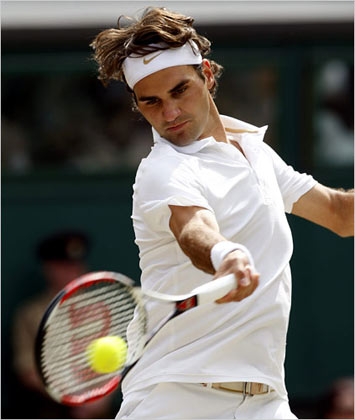 (Source of the pic used above: http://tt.tennis-warehouse.com/showthread.php?t=278801)

(Source of the Picture: http://www.tennis-training-central.com/forehandgrips.html) 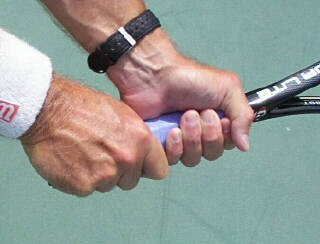 (Source of the picture: http://www.tennistechnique.co.cc/)

(It gets tough for young kids to learn to give power from the non-natural hand, since it is opposite to the mechanics of the forehand)

The One Handed backhand (normally played with the eastern backhand grip) scores over the two-handed backhand by providing flexibility to slice or to extend reach. 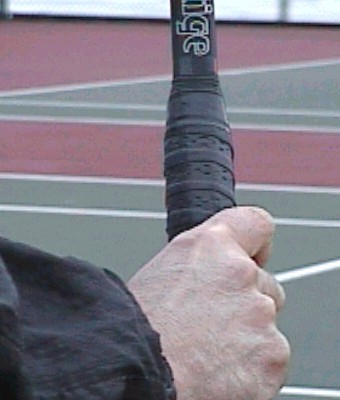 (Source of the picture: http://tennisworld-tennis.blogspot.com/2010/11/tennis-eastern-backhand-grip-with.html)

It is also easier to hit topspin with a one handed backhand as opposed to a two hander. This facilitates hitting short corners which are becoming increasingly essential in todayâ€™s tennis.

The downside is that it is very tough to counter high balls on the backhand side.

The Semi-Western backhand grip is used to generate more topspin on the backhand. But tt can be a tough grip to master.

I believe it is always good to know the advantages and limitations of what you are doing so that you know how to cover up for the limitations.

A player would also do well to keep the above mentioned limitations in mind and use the knowledge to attack the opponent at his limitations.

At the end, we should also remember that the way the grip is held will differ from person to person because of the changes in the sizes of oneâ€™s hand, the fingers, the strength of the palm etc. So let the arm find its correct grip on the racket.

Just remember, whatever your grip, it will help you with certain things and will also limit you with some!

And I think playing tennis with a grip thatâ€™s neither effective nor efficient is not smart!

This entry was posted in Uncategorized. Bookmark the permalink.