Samasam Tennis > Blogroll > Uncategorized > The Most Important Rule of Tennis

The Most Important Rule of Tennis

In fact, I have been itching to get to talk about tennis tips and other finer aspects of the game.

So let me begin with what I consider to be the Most Important rule of Tennis.

What do you think is the most important, most sacred rule in Tennis? 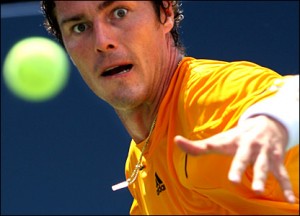 Hereâ€™s why I call it the most important: You can do any other thing in tennis (like play with a wretched grip, hit in an awkward manner) and still manage to get the ball in play if and only if you watch the ball.

Well I have a question for you: How many times can you recall having watched the ball all the way to the contact?

Unfortunately, it is simple, but not easy!

Most of the players are not good at watching the balling.

A lot of them SEE the ball.

SEEING is very casual. It is just like the story of the Five Pandavas who were being trained by Dronoacharya in archery. The goal was to shoot the birdâ€™s eye. The four Pandavas saw the tree, the sky, the branches, leaves and everything else around the bird.

So when I say â€œWatch the Ballâ€, I simply mean watching it with a lot of interest and focus.

Hereâ€™s one part of the watching the ball routine which is the toughest to do, but one I believe is the most essential.

It is to watch the ball as it hits your racket.

A lot of us watch the approaching ball quite fine. It is during the last one or two feet when the ball travels that we do not try and watch the ball.

Take a look at the pic below. Notice how the player in question is not looking at the contact point but is looking ahead. 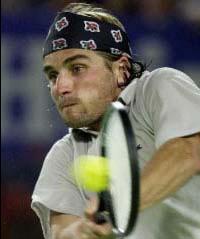 Now why do you think we do not watch the ball hitting the racket more often.

Here are my top three reasons:

1.Â Â Â Â Â  We have not been trained to do so when we started playing

2.Â Â Â Â Â  Changing a habit becomes tougher the more that we have practiced with the improper habit

3.Â Â Â Â Â  Once we hit the ball, there is an urge to see quickly where the ball is headed or in which direction the opponent is moving

Not watching the ball all the way to the contact makes all the difference between great players and average players.

I was at the Chennai Open recently and I made it a point to check if all the top players really watch the ball. My gut feeling turned out to be quite correct. All the best performers in the tournament were the ones who watched the ball very keenly and onto the racket.

In my opinion, it is because of this habit that average players have more off-days than great players primarily because some of the basics are not in place. And what could be more basic than the old adage â€˜Keep your eye on the ball!â€™

How do you set it right?

Set your focus to do it on every shot you hit. This is easier said than done. It requires a lot of discipline. But believe me, once this is achieved it will go a long way in improving the quality of tennis of the player.

I believe that if one can practice watching the ball all the way to the racket for 7 days, it will stay on as a habit forever.

Try and practice just watching the ball to the exclusion of everything else. Keep trying and you will see the difference.

What else can one do to form the habit?

It helps if you exaggerate watching the ball at the contact a little.

Let Federer show you how! 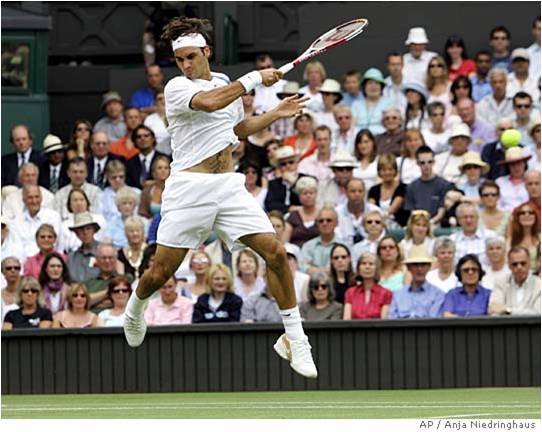 Notice that the ball is on the extreme right of the picture.

But what is Federer doing? What is he watching? Did a grasshopper catch his attention during this all-important match at Wimbledon!

The answer is that Federer has just exaggerated the action of watching the ball. He is keeping the head still and looking at the place of contact, even after he has hit the ball.

How does this help?

It helps counter the urge of looking too quickly where the ball is headed and to see which direction the opponent is moving. (as stated in point no. 3) above.

A lot of my students have asked me this counter-question: Sir, wouldnâ€™t we get late for the next ball if we kept looking at the contact point?

So I get them to try it out while rallying or playing out the point. And surprise, surprise!! They do not get late at all!

Hereâ€™s another way to look at it: If Federer and Nadal do it while playing tennis at the highest level, where the reaction time will be the least and yet they do not get late, rest assured this tip can be followed by tennis players at all levels and they will not get late for the next shot.

Hereâ€™s Nadal doing it for you: 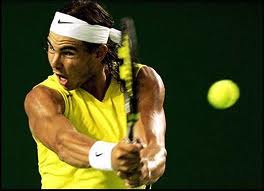 Hereâ€™s Nadal on the run and still doing it!! 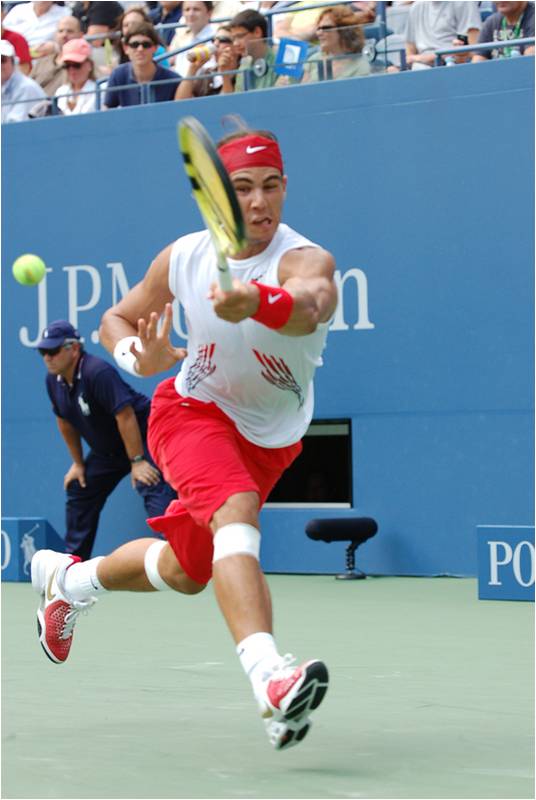 Try it out and see for yourself.

Let me know your experience with this tip.

In case you want to learn more drills and perfect this technique, you can request for a coaching and/or a counselling session with me at http://www.samasamtennis.com/index.php/request-an-appointment/

Hereâ€™s one wonderful research done on watching the ball.

See you next week!!!

(Some pics used above are from the above mentioned research link)
This entry was posted in Uncategorized. Bookmark the permalink.